Think piece: Who owns a ‘fix’?

Think piece: Who owns a ‘fix’?

In this blog I want to explore two interrelated themes in the Fixperts story thus far: ownership of the ‘fixes’ (the outcomes of the collaborations), and their potential wider applicability beyond the collaboration through which they were generated. These two themes are related because if a fix is deemed to be successful, thoughts quickly turn to if and how it might be applied to other users and other scenarios.

Stage 9 of the ‘Fixperts Project Framework’ is “Presentation: Present the movies, talk about you’re (sic) experience, review the process and solution. Discuss the potential of harvesting the fix for other users, designing a new product or service or creating a report to improve industry.” (Fixperts Education Project Guidelines, page 3)

‘Harvesting the fix’ might mean replicating it with similar users or in similar scenarios:

“After presenting the fix to the London Ambulance Service, we were commissioned to produce 50 more; one for each cycling paramedic working in London.” (Paramedic cyclist video, closing credits) 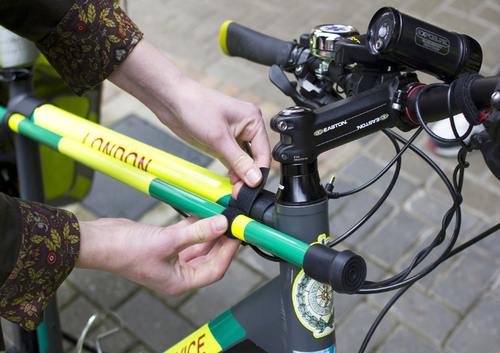 Still from Paramedic cyclist of the final prototype.

This is a logical move when the fix addresses a problem faced by a number of users – in this case how to keep a piece of medical equipment which is used orally clean and protected from the elements when mounted on a bicycle used in all weathers. Presumably each of the 50 paramedics is issued with a standard kit of equipment, and so the problem faced by this FixPartner (and solved by the Fixperts) will be common to his colleagues. The same might apply to the Dairy Crest fix, in which the Fixperts worked with a milkman to address the apparently universal problem of customers leaving notes which are often not seen by the milkman because they are left in ad hoc locations, and milk is often delivered before the sun has risen. In this case the fix addresses a challenge faced by a service provider across a significant scale of service delivery. A communication design solution which works in one case is likely to work in all other cases.

These examples contrast with fixes which are bespoke one-off responses to individual situations and their very particular needs, for example Whippersnappers (in which the fix was a site-specific reorganisation of available storage space). This type of fix is summed-up by one FixPartner when presented with the first prototype of his fix: 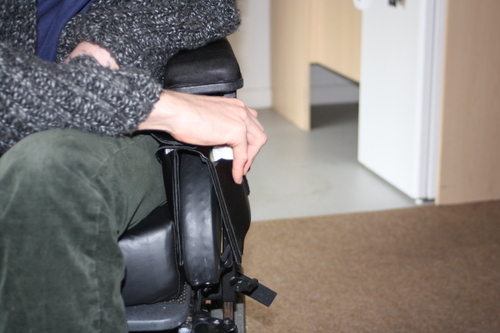 Still from Patrick of the final prototype

The fix in this case responds to the requirements of a FixPartner with a very particular set of physical challenges. Patrick is unlikely to be typical of a large number of users; therefore the fix developed for him is more limited in its direct repeatability. In this case, what can be ‘harvested from the fix’ is perhaps the process by which the collaboration took place, and the knowledge gained by the Fixperts about working with someone with Patrick’s degree of physical disability. The understanding gained and principles established by the Fixperts in order to deliver a fix of value to Patrick will perhaps be useful when working with FixPartners with similar (if not identical) needs as Patrick.

This consideration of the replicability or transferability of fixes generated by fixpert-fixpartner collaborations raises the issue of ownership. Here is the stated position of the Fixperts project:

“Who owns the ideas? The ideas, inventions and intellectual property belong to those who create them.” (Fixperts Education Project Guidelines, page 4)

Presumably this is the Fixperts, who, while they collaborate with a FixPartner, are very much designing a solution for, rather than with, them. This is user-centred design, rather than codesign. The needs of the FixPartner are placed at the centre of the design project, but the FixPartner is not an active participant in the design process itself. Patrick is a product design graduate, and therefore has capabilities in design thinking which probably exceed those of most FixPartners. As such he might be considered an exceptional case, in that he might himself conceive of viable design solutions to his needs independently of his Fixperts. Patrick’s disability came after his design training – “I sustained a ‘Traumatic Acquired Brain Injury’, and a six month coma from a ‘road traffic accident’ whilst cycling, in October 2006.” (http://patrickgoodacre.blogspot.co.uk/) – and now inhibits his ability to be as active as he would like to be as a designer. His background does however highlight the potential value in codesigning fixes, with the Fixpert acting as a facilitator of a shared design process, more than a conventional designer-client relationship.

The issue of ownership is relevant to the potential wider exploitation of fixes. ‘Harvesting the fix’ might after all also potentially mean seeking to extract commercial gain in return for adding value for a significant number of prospective users, although this is yet to be discussed openly in the Fixperts project. The Creative Commons system of copyright licenses allows the creators of protectable content to retain and/or waive a number of their rights in relation to that content, for the benefit of others. (http://creativecommons.org/) The spirit of Fixperts would seem to fit with this progressive attitude to ownership – perhaps use of CC licenses for fixes is a useful next step for the project? Fixes are embodied and applied – not abstract – ideas; they are therefore potentially (but not necessarily guaranteed) protectable. CC might allow the project to better protect the interests of its collaborators, Fixperts and Fix Partners alike? Intellectual property law is intended to ensure that the entrepreneur pays dues to the inventor whose concept she is taking to market as an innovation. Where the inventive step is distributed among multiple actors, as in codesign, acceptable attribution can become difficult. For Fixperts, for now, this issue is straightforward, but it may not always be so.